The UNESCO Chair in ICT4D is passionate about partnerships, not only through its research about them, but also through their practical importance in delivering effective empowerment for poor people through ICTs. Over the years, the group has worked with many partners both for research purposes and also in practice, and details of these are listed towards the end of this page.

Currently, the UNESCO Chair in ICT4D is represented on the following advisory boards, steering groups and working groups:

We are currently an official partner of the following:

Some of our research publications on partnerships include: 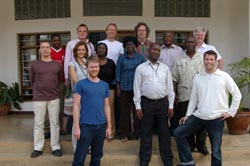 The UNESCO Chair in ICT4D and the ICT4D Collective have had many previous research and practice-based partnerships for all of which we are most grateful.  These include the following, :